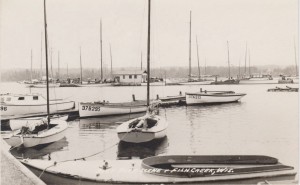 Fish Creek’s waterfront has a long history of serving the maritime industry in Door County and the location of the current Alibi Marina has been a part of that history. One of the early photos shows the dock and building complex used by local fisherman and enjoyed by local residents and visitors who stayed at the Thorpe Hotel, now the site of Founders Square. Who or how the name Dock the “Alibi” was 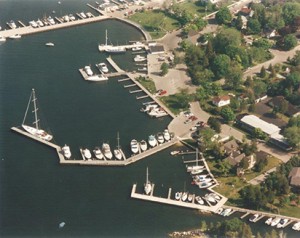 established is unknown. The original building, now the office, restrooms and rental apartment above, was once a hamburger stand, circa 1940-50’s, and as seen in the photo, it was named the Alibi. The Alibi Dock, as it was then known, included one large pier providing some but limited protection to the finger piers located off the shoreline bulkhead and some of the original piers at the east end of the property as can be seen in the photo. 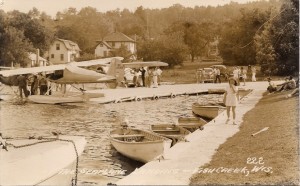 The current Alibi Dock, now called Alibi Marina was purchased in 1995 from the owners of the Sturgeon Bay Yacht Harbor by North Point Marina, LLC, (North Point). North Point not only recognized the value of the location and its proximity to the center of Fish Creek, but also the ability to combine the Alibi location with the Harbor Guest House Marina, adjacent to it and already owned and operated by the new owner. 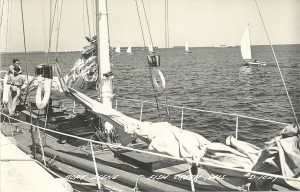 Expansion plans were developed and DNR approval was granted in early 1997. Expansion included increasing the number of slips from 35 to 98 seasonal slips and an additional dedicated 24 transient slips.  The original wood crib bulkhead was encased in steel sheeting and a new steel and concrete bulkhead was extended the full length of the property to the east, providing full protection to the interior area of the expanded marina, as can be seen in the photo. 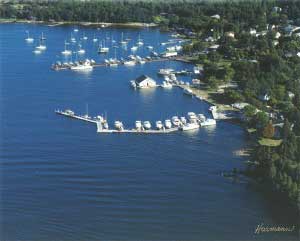 The Alibi and Harbor Guest House Marinas combined offer 148 slips and can accommodate boats over 100′ ft. The original Alibi hamburger stand was renovated and includes washrooms, office and a two bedroom two bath, apartment with a large deck overlooking the marinas for boaters wanting to stay on shore or for those just visiting Fish Creek.  It is managed by the Harbor Guest House which includes an additional 6 fully furnished one and two bedroom apartments, all overlooking the marinas.